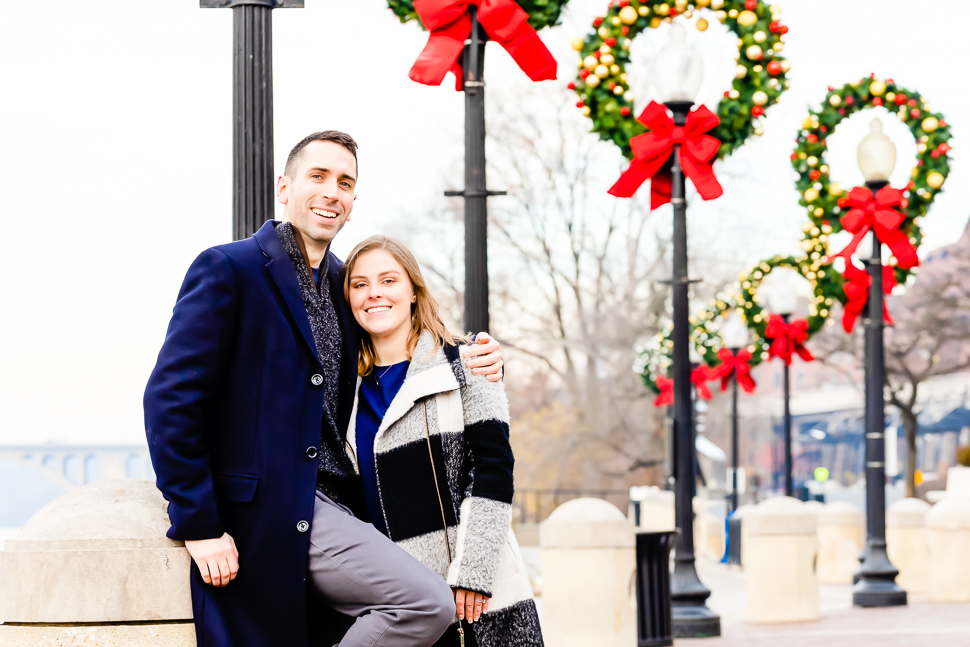 DC War Memorial Engagement Session Photographer. Lindsay and Matt’s paths crossed at a work event in 2015. Lindsay had thought Matt was cute but didn’t really think too much more about it. Over the next few years they became close friends and then started dating.

The proposal according to Lindsay. We always go down to the National Mall in the fall and take pictures at the monuments. Matt asked if I’d want to go take some pictures. I didn’t think too much of it and agreed since the weather was so nice. Our first stop was the Tidal Basin. We took some sunset pictures and then started our trek over to the Mall. Once we’d gotten to the Washington Monument I’d had enough. I told Matt I was hungry and wanted Chaplin’s. He said to look for a reservation around 9PM. I looked at him like he was crazy because it was 6PM. I asked him “How long are we going to be walking on this Mall?!?” Ignoring him, I went back to looking at reservations but nothing was available until 9PM so he suggested we go get a seat at the bar there.

Matt made the good point of saying we’d come all the way to the Mall and should at least walk to the other side. I agreed and we began walking towards the Lincoln Memorial. Then Matt pointed out the DC War Memorial, a place we’d seen another couple get engaged on one of our first dates. As we walked up the steps, I was pulling out the camera to take his picture and he popped the question right in the middle of the rotunda. I cried and neither of us really remember what either of us said except me saying YES! After calling our family and friends, we did finally make it to the Lincoln Memorial and eventually Chaplin’s where we had celebratory ramen and drinks!

Lindsay and Matt have planned to have their wedding ceremony at the Church of the Holy City and I’m looking forward to being apart of it as their wedding photographer. We decided on having an engagement session amongst the monuments of the DC War Memorial and the Georgetown Waterfront. Enjoy some of the photos we made from their session below and Contact Us to schedule your engagement session.